A Holistic Expert & Wellness Coach With Over 35 Years of Experience 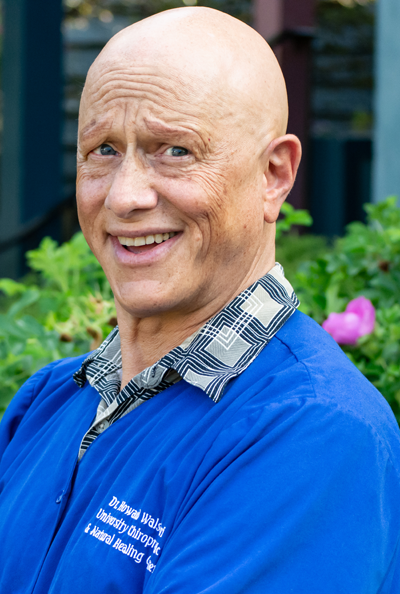 Dr. Walsdorf, a holistic Chiropractor since 1983, is on a mission. Part of that mission helping his patients. They notice that his ability to tap into a set of deep natural healing energies sets him apart from most doctors. People with a wide variety of health problems come to see him or choose virtual office visits.

Many find his strategy for accomplishing this renewal of America both interesting and intriguing. That’s because it builds upon an ancient wisdom. The Ancients sensed that Nature’s four elements – Fire (the sun), Air, Water and Earth – expressed a cosmic pattern involving four primal “spiritual principles”. Dr. W is here to bring this four element wisdom back.

It is life-changing as you learn how to tap into the four elemental, life-positive forces that surround you. He has seen that the more his patients have tapped into and used these natural forces the more their bodies healed, their minds became less stressed, and their spirits even became stronger and more positive. His patients see him as both a doctor and a visionary as he works tirelessly to help them and others to heal and regain their natural sensibilities.

There are few holistic doctors who have the 35 years of experience that Dr. W has using a combination of holistic nutrition, special exercises for your organs (4 Element Yoga), Chinese Herbs, and an individually-paced Health & Wellness Course.

Become a member of this 4E Healing Community by joining his on-line Health and Wellness Course or by becoming a Virtual Patient.

Here’s what others are saying:

Dr. Walsdorf’s course gave me a broad understanding of what I can do to help myself by bringing the power of “the four elements” of nature into myself. While I enjoy the spiritual-metaphysical parts to it, there are a lot of practical things that I’ve gotten out of it. It’s so much different than other health courses that I’ve taken. I recommend it to anyone looking for a path out of negativity and poor health.
John R.
I had cancer and while I did the chemo and their treatments, I also used Dr. W to help me in a complementary way. He gave me the nutritional supports that not only helped me through the chemo, but I truly believe he saved my life with those supports – and the special Visceral Yoga maneuvers he gave me.
Linda M.
I had kidney issues that were causing me pain in my back area. After I filled out the symptom survey form, I received some supports – including an herbal tincture that made everything so much better. My kidney pains went away and my flexibility improved. The Visceral Yoga maneuvers I learned helped, too. I still do them – they feel good to do!
Tom H.
I had a lot of mental stress and anxiety. I went to a lot of doctors for it and took a lot of meds and supports. After completing my symptom survey form and Dr. W reviewing it and going over it with me, he came up with some great herbs and some nutritional supports. While it took a month for it to get pretty much all better, I felt some improvement right away. His way of explaining the blockage of energy helped me to understand what I could do to keep it under control. While I had a hard time believing that the 4 Element Yoga he gave me for my skull would help, I notice that when I remember to do it I feel even better.
Mary R.
In addition to stomach and thyroid problems I had terrible migraines. The symptom survey form helped Dr. W to figure out where my body was going off-line biochemically. He gave me the supports I needed. I feel so much better. I’ve lost 30 pounds and my migraines are almost all gone. Along the way I’ve learned so much. I don’t mind being called a fellow Fourisimo’ – I truly believe that what Dr. W has done with the “four elements” as far as nutrition and his yoga is remarkable!
Beth B.
I originally had a lot of stomach issues and some parasites, too. Dr. W’s symptom survey helped him to figure out what kind of nutritional supports I needed. Standard Process’s nutritional supports are quite different than the type I got from my other doctors and nutritional specialists – and they did the trick that the others could not. And I learned a lot from him, too.
Susie B.
To be honest, I was skeptical. But I was depressed, and as they say, “sick and tired of being sick and tired”. I decided to bite into this “four element way of thinking, healing and living”. I followed his course and found that I became more spiritually positive. I followed his walking program. Eventually I joined his higher level virtual visit program. That’s when Dr. W found the nutritional supports that revved up my body. Apparently I was so depleted of “the power of life” as he called it. The previous nutritional supports I was taking from the drugstore were what he would call, counterfeit nutrition. I am a new person now!
Judy P.
I’ve been on my own spiritual journey for a while. Have dabbled a lot in different personal growth models, read a lot of people’s books… That said, the four element natural perspective of Dr. W is so much more complete and interesting and holistic. I’m surprised no one else is speaking in the four element terms that he does. I’m growing by leaps and bounds. Life is more interesting and more fun too. I love the 4 Element Yoga I’ve learned – and how to walk in ways that brings nature’s heaing forces into me.
Mike G.