Eyes – How and why They Need Your Help 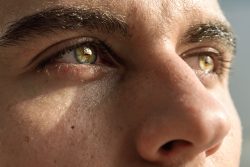 From a 4 Element perspective, it is easy to appreciate that your eyes are the Fire element’s sense organ of the body – in the same way that your ears are your body’s Air element sense organ.  And while sound moves through air, it’s interesting to know that taste and smell molecules work by moving through water.

The taste receptors in our tongue and the olfactory organs in our nose both depend upon water to dissolve the biochemistries we sense with them. And lastly, can you see how your Earth sense organ would be all those touch receptors in your skin – helping you to physically feel the world around you.

With all that said, perhaps no sense organ is as under stress as much as your eyes. Why? One major reason is that light is itself an inducer of stress by way of the potentially dangerous chemical reactions it creates. Your body has protective mechanisms that help your eyes withstand the high energy light that hits its tissues.

Cataracts are one problem that can come from this. That’s one reason for Vitamin C as well as certain minerals’ (like zinc) value to the eyes in their antioxidant role. While Vitamin C and Vitamin A’s beta-carotene supportive help to the eyes was discovered many decades ago, the newest eye research shows that there are many other carotenoids as well.

Most of the 600 or so carotenoids are large 40 carbon molecules that work to counter the affects of blue light. Blue light is the most energetic of light frequencies (why ultraviolet is dangerous, versus infrared, which is not). These  carotenoids absorb blue light – which makes them red or yellow. Within plants they lie near chlorophyll to capture some of the high energy that comes with photosynthesis so that the plant’s chlorophyll molecules do not become damaged.

More important than cataracts for many people is macula degeneration. The macula is part of the retina in the back of your eyes that is dense with the cones needed for color resolution. And to protect your macula, and your retina in general, from this same blue light are two particular carotenoids – lutein and zeaxanthin that are concentrated in their in the eye.

From a 4 Element perspective naturally colorful biochemistries – plant pigments in this case – have health benefits. And the reason they have health benefits is because they express in their chemical makeup principles.  They, like another set of useful natural healing components, the polyphenols, also found in plants, are best seen as expressing the Earth Principle.  The Earth Principle seeks to give energy a physical place to vibrate within; Earth attracts energy; Earth is yin to Fire’s yang.

Carbon – the backbone of life’s chemistry (organic chemistry) – is clearly the most important Earth element atomic element.  It gives a place for the hydrogens of the cosmos – the Fire Principle’s atomic element – a place to bond. Unlike the polyphenols that are long flat ringed structures of carbon, carotenoids are linear. But like other Earth element-dominated compounds there are many double bonds, making them dense with carbon. Earth element natural compounds help to put out biochemical fires in the body, like a flat rug might be used to put out a small house fire.

4 Element Healing Concept: While the polyphenol compounds of many fruits and vegetables are essential to keep fire-raging inflammation down in your body as a whole, carotenoids like lutein and zeaxanthin are used by the body to repress these fire blazes in your eyes.

Action Step: Eat foods like kale. Kale is one of the highest in lutein as far as vegetables are concerned. Swiss chard, spinach, collard greens and mustard greens are good as well.  Paprika’s color comes from these compounds. One of the best sources of lutein in particular is nasturtium flowers.

What’s Your Vision?
Your eyes are such an important part of your body, so it’s paramount to keep them operating in a healthy way.  The longer we live, the more vulnerable they are to ultraviolet and the free radicals that can destroy their vulnerable tissues. [read more…]